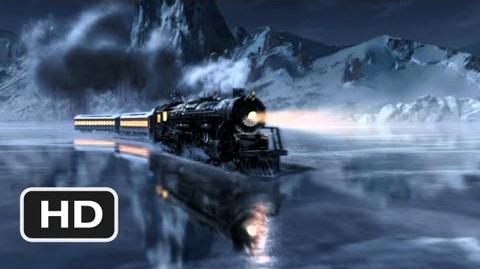 "Jiminy Christmas! The ice has frozen over the tracks!"
— The Conductor before the train slides onto the Ice Lake.

The Ice Lake is a location in the film, The Polar Express.

The Ice Lake is a frozen-over lake that the Polar Express slides onto after speeding along Glacier Gulch. While on the lake, Smokey hits Steamer's back with a shovel to get the cotter pin out of him, which he had accidentally swallowed after it came loose from the throttle. However, it flies out of the cab and pierces the ice, causing it to fracture. Meanwhile, the train crashes into an iceberg, causing the locomotive to lean sideways. Hero Girl almost falls off, but is grabbed by the Conductor and Hero Boy. However, they are unable to pull her to safety, so the Hobo appears and helps them, but disappears before anyone other than Hero Boy could see him. The train stops after Smokey uses the pin from his hair to fix the throttle.

The Conductor checks on Smokey and Steamer when Hero Boy sees the cracking ice, so Smokey and Steamer drive the train away. Hero Boy finds tracks on the other side of the lake and the Conductor gives orders to Steamer to go right and left to align with them. Meanwhile, Hero Girl's ticket, which Hero Boy put in his slipper during his first encounter with the Hobo, is blown out, so Hero Girl and Hero Boy try to catch it. They grab it, but the the ice starts breaking under the train. Luckily, the engine hits the frozen-over tracks and the train is saved.

When Hero Boy, Hero Girl, and the Conductor make their way back to the passenger cars, Know-It-All, who had experienced the events from inside the train, tries telling them to Hero Boy. He claims the train being on ice was just an optical illusion since it would be impossible for the train to really be on ice. However, Hero Boy is more interested in what is going on the observation car and goes there without saying anything.

With the ice cracked and the tracks flooded, it is unknown how the train did the return journey. It is possible the lake refroze or the train took a different route around the lake.