Underwear as a present for Christmas

"Hey! Hey, you! Yeah, you! Do you know what kind of train this is?"
— Know-It-All first meeting Hero Boy.

The Know-It-All, is one of the children onboard the Polar Express. He is talkative and he seems smart at first, but it is soon apparent that he only wants to be smart and needs to learn more.

Journey to the North Pole

Hero Boy first meets Know-It-All on the train right after he takes a seat. Know-It-All asks Hero Boy about what kind of train they are on, leaving him confused. Hero Girl joins in saying it is a magic train that goes to the North Pole. Know-It-All proceeds to give a detailed description of the locomotive before noticing Herpolsheimer's outside and calls out to the other children to come and see it. The store features a Christmas display with a pile of presents, to which Know-It-All exclaims, "I want all of them!"

When the Conductor punches the children's tickets, he puts "LE" on the one from Know-It-All, who claims the Conductor is a show-off with how he punches tickets and wonders what the letters mean. Hero Girl would later get the same letters. He is surprised when they stop at Billy's house, as he thought Hero Boy was the last passenger. Billy turns the trip down, but changes his mind and runs after the train as it leaves. However, since he has trouble getting on, Know-It-All suggests Hero Boy should pull the emergency brake, which stops the train and allows Billy on board. When an angry Conductor storms in, Know-It-All tattles on Hero Boy, even though it was his idea.

When Hero Girl goes to give Billy hot chocolate, Know-It-All and Hero Boy try to persuade her out of it with the former saying it is against railroad regulations for children to cross moving cars without an adult, but the Conductor shows up to assist her. Know-It-All then warns Hero Boy when he leaves to give Hero Girl her ticket back. Later, the Conductor comes to punch Hero Girl's ticket, but when she cannot find it, he takes her to the back of the train. Know-It-All says she might get thrown off the train and they might slow down for her, but not fully stop, giving Hero Boy the idea to stop the train again. However, before doing so, he finds the ticket on the air vent above the brake, so he grabs it and goes after Hero Girl and the Conductor.

After the train passes through Glacier Gulch and the Ice Lake, Hero Boy, Hero Girl, and the Conductor return to the passenger cars. Know-It-All tries explaining the events to Hero Boy, claiming the train could not have been on the ice and it appearing that way was just an optical illusion. An uninterested Hero Boy heads to the observation car without saying anything.

At the North Pole

In the bag of gifts, the other children find Know-It-All in the bag with them after he pulls on Billy's leg, likely thinking it was a present. He says he wanted make sure he is getting everything on his list, but only found one present with "a bunch of stupid underwear." Soon, they arrive at the Square and Hero Girl notices the time is still 11:55. Know-It-All claims they will not be late since the time has not changed for the past hour. The bag is landed on Santa's sleigh and the elves go to rescue the children. Know-It-All tries to appear innocent by saying he was only following the others.

When Santa Claus arrives at the Square and speaks to the children, Know-It-All impatiently asks Santa to pick him as the one to receive the first gift with Hero Girl trying to make him behave, but he does not stop until Santa tells him to be patient and show a bit of humility. Know-It-All also watches Hero Boy receiving the first gift and Santa Claus flying away in his sleigh.

Before boarding the train for the ride home, his ticket is punched again. He looks at it and reads "LEAN," though is unaware that his fingers is covering a letter and that it really says "LEARN." The Conductor tries explaining Know-It-All's mistake, which makes him angry at him for supposedly making him look dumb, but when he takes a second look and sees the R, he apologizes and gets on the train. Like the other children, he asks to see Hero Boy's silver bell and feels sorry for him for losing it.

Know-It-All sits next to Billy during the trip. Before Billy gets off the train, Know-It-All asks where he is going and Billy explains that the train has stopped at his house. He also says goodbye to Hero Boy before he gets off the train, still feeling sorry about the bell. He points out, "It's the thought that counts."

The Polar Express: The Video Game

Know-It-All is one of the children whom Hero Boy helps find their ticket, which was stolen by Scrooge. Beforehand, he brags about how he never loses his ticket before realizing it is gone. His ticket was in the dining car and Hero Boy had to win a food fight against Scrooge's friends to get it back. When Know-It-All sees the mess, he tells Hero Boy it is against railroad regulations to throw objects inside train cars, but happily thanks him for finding his ticket anyway and advises him to leave before the cook sees the mess. When Hero Boy returns from helping the children, he advises everyone to take their seats since regulations forbid blocking fire exits, which annoys Hero Girl. Next, he is one of the children cheering Hero Boy during the final battle with Scrooge.

Later, he appears on board the zeppelin with Hero Boy, Hero Girl, and Billy. Like in the film, he tries to act innocent by telling the captain he was only following the others. When the captain asks for their help, Know-It-All asks if it will make him the first to see Santa, which annoys the other children. After Hero Boy returns from driving the zeppelin, Know-It-All complains about how bumpy the ride was.

Know-It-All is one of many characters from the film whom did not come from the book. The design on his pajamas was meant to reflect space exploration from the 1950's.[1] 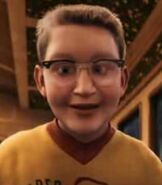 Know-It-All in The Polar Express: The Video Game