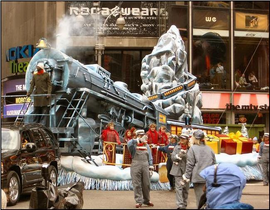 The Macy's Thanksgiving Day Parade is held annually on Thanksgiving Day in Manhatten, New York. Having started in 1924, it is presented by department store chain Macy's and features floats and large balloons based on popular children's characters as well as marching bands and ending with a float of Santa Claus on his sleigh to start the Christmas season.

A float based on The Polar Express appeared in the 79th annual parade in 2005 to promote the home media release of the film. It was designed by Joel Naprstek and featured the train spiraling down Corkscrew Mountain in a winter environment surrounded by presents and a snowman. The locomotive had real smoke coming from its smokestack, though it lacked a tender. The float was escorted by Macy's employees dressed as train conductors and accompanied by a performance of "Believe" by Brian McKnight.

The float returned in 2006, this time with "Believe" performed by Natalie Grant. Following the parade, the float was taken apart, though the snowman would be reused ten years later for the Deck the Halls float by Balsam Hill.