The Polar Express is the titular magical 2-8-4 wheel configured American Berkshire type steam locomotive that transports children to the North Pole on Christmas Eve. The locomotive pulls five passenger cars (however, some scenes show the train with more or less), including an abandoned toy car at the front and an observation car at the back.

The train makes two stops in Grand Rapids, Michigan to pick up Hero Boy and Billy the Lonely Boy respectively. Later in the film, Smokey and Steamer, the locomotive's fireman and engineer, have to fix the light, so Hero Girl is put in charge of driving. Suddenly, Smokey and Steamer see something ahead on the track and call out to Hero Girl to stop the train, but she and Hero Boy have trouble figuring out which lever applies the brakes. Eventually, Hero Boy applies the brakes and the train stops just before it crashes into a huge herd of caribou.

After the caribou get out of the way, Smokey and Steamer return to the cab and start the train again. However, the throttle jams due to the cotter pin coming loose, causing the train to accelerate uncontrollably. The pin eventually comes off, along with the throttle, and falls into an air vent. To make matters worse, the train is approaching Glacier Gulch, the steepest downhill grade in the world, so the Conductor ties Hero Boy and Hero Girl to the safety bar at the front of the locomotive to keep them from falling off. While the train goes down the gulch, the pin comes back out of the air vent and Steamer catches it with his mouth, but accidentally swallows it. Next, the train speeds onto the Ice Lake and Smokey gets the pin out of Steamer by hitting his back with a shovel, but that sends the pin flying out of the cab and into the ice, causing it to crack. The train crashes through an iceberg and leans sideways, causing Hero Girl to nearly fall off the locomotive, but she is saved by Hero Boy, the Conductor, and the Hobo. Smokey finally uses the pin from his hair to fix the throttle, allowing Steamer to control the speed again. Everyone soon notices the cracking ice, so Smokey and Steamer get the train back on the tracks with the Conductor navigating.

The Conductor, Hero Boy and Hero Girl later walk across the locomotive to get back to the passenger cars.

Chris Van Allsburg based the locomotive in the book on the Pere Marquette 1225, a 1941 Berkshire N-1 class 2-8-4 locomotive built at the Lima Locomotive Works. He chose this design because he used to play on the locomotive while attending games at the Spartan Stadium in East Lansing, Michigan, where it was placed on static display at the time. He was also inspired by its number, which is also the date of Christmas.

The locomotive's design was used in the film, as well as its sounds, with the exception of its whistle, which came from Sierra Railway No 3. Drawings and blueprints of the locomotive were used to create the 3D model.

Today, the 1225 is housed in Owosso, Michigan and is operated and maintained by the Steam Railroading Institute. The 1225 frequently hauls passenger excursions in Michigan throughout the year, including the world-famous North Pole Express trips throughout the months of November and December.

In both the original book and the film adaptation, the Polar Express is painted black along with its tender. Its tender in the film, unlike in the book, has the words "Polar Express" in white on both sides.

a Strasburg Railroad coach, the basis for the coaches the loco pulls 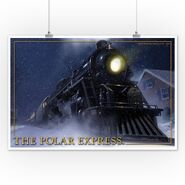 The Polar Express on the Ice Lake.

Another picture of Pere Marquette 1225.

G-gauge, incorrectly depicting the engine as a 2-8-2