The Polar Express Train Ride is a tourist event that has been held annually at various heritage railroads during the Christmas season since 2004 when the film The Polar Express was released. These events are licensed through Rail Events, Inc., who also handle railroad events featuring Peanuts characters. They are mostly held in the United States, though a few railways in Canada and the United Kingdom hold these events too.

Events involve a train, sometimes pulled by a steam locomotive if available, acting as the Polar Express. The train might be adorned with Christmas decorations and have the words "Polar Express" painted on the sides of the coaches and the tender specifically for the event.

Passengers are taken on a journey onboard the train, usually an hour long, to another part of the railroad acting as the North Pole. During the trip, songs and music from the film are played while the passengers are served refreshments, mainly hot chocolate and cookies. There is usually a reading of the book The Polar Express at one point. Cast members can also be seen playing characters from the film, including the Conductor, the Pastry Chefs, Smokey and Steamer, the Hobo, and Hero Boy. They mostly do dance performances and sometimes reenact scenes from the film.

The train soon arrives at the North Pole, often represented by a light display. There, Santa Claus boards the train and gives each of the children their own silver bells as the first gifts of Christmas. The train then makes its return journey. Sometimes, the passengers get off the train at the North Pole and partake in activities before the return trip. 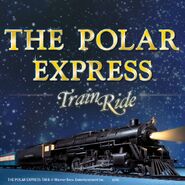